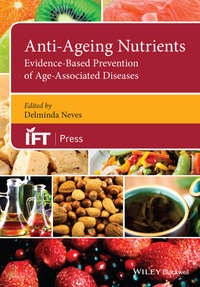 Ageing is a complex, time-related biological phenomenon that is genetically determined and environmentally modulated. According to even the most pessimistic projections, average lifespan is expected to increase around the world during the next 20 years, significantly raising the number of aged individuals. But increasing life expectancy presents new problems, and industrialized countries are facing a pronounced increase in lifestyle diseases which constitute barriers to healthy ageing.

Anti-Ageing Nutrients: Evidence-based Prevention of Age-Associated Diseases is written by a multi-disciplinary group of researchers, all interested in the nutritional modulation of ageing mechanisms. Structured in three parts, Part 1 looks at the cellular modifications that underlie senescence of cells and ageing of the organisms; the effects of energy restriction on cellular and molecular mechanisms and in the whole organism; and the epigenetic modifications associated with ageing. Part 2 includes chapters which discuss the nutritional modulation of age-associated pathologies and the functional decline of organs, with a focus on those primarily affected by chronological ageing. Part 3 summarises the knowledge presented in the previous chapters and considers the best diet pattern for the aged individuals.

The book reflects the most recent advances in anti-ageing nutrition and will be a valuable resource for professionals, educators and students in the health, nutritional and food sciences.